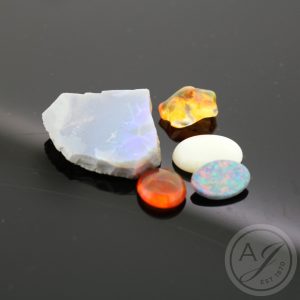 October is here and it's starting to get dark and drizzly; but those born in this month will know all about the magical birthstone which brightens up the month.

Opal is the product of seasonal rains that drenched dry ground in regions such as Australia’s semi-desert “outback.” The showers soaked deep into ancient underground rock, carrying dissolved silica (a compound of silicon and oxygen) downward.

During dry periods, much of the water evaporated, leaving solid deposits of silica in the cracks and between the layers of underground sedimentary rock. The silica deposits formed opal.

Opal is known for its unique display of flashing rainbow colors called play-of-color. There are two broad classes of opal: precious and common. Precious opal displays play-of-color, common opal does not.

Play-of-colour occurs in precious opal because it’s made up of sub-microscopic spheres stacked in a grid-like pattern—like layers of Ping-Pong balls in a box.

As the lightwaves travel between the spheres, the waves diffract, or bend. As they bend, they break up into the colours of the rainbow, called spectral colours. Play-of-colour is the result.

The color you see varies with the sizes of the spheres. Spheres that are approximately 0.1 micron (one ten-millionth of a meter) in diameter produce violet. Spheres about 0.2 microns in size produce red.  Sizes in between produce the remaining rainbow colors.

Although experts divide gem opals into many different categories, five of the main types are:

- Opals are 20% water trapped in a silica structure?

Top
item(s) in your cart